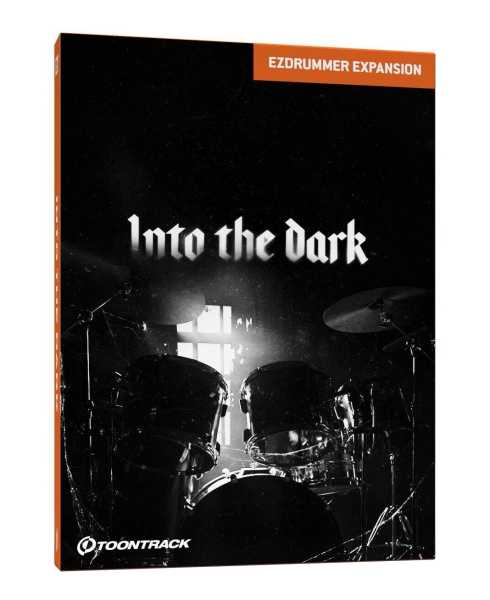 Toontrack Into The Dark EZX [TT534SN]

ENTER AT YOUR OWN RISK.
Mix-ready drums, tailored for post-punk, dark rock and goth.

This EZX presents the perfect mosaic of drums for any production that calls for an extra bit of that grisly, ghastly and raw tint of dark rock, post-punk and goth. Where better to capture just that than in its very cradle, where pioneering acts like Bauhaus, Echo & the Bunnymen, The Cult and many others struck chords that moved enough air to not only start a wave but also shape an entire sub-culture in its backwash? Welcome to the Into the Dark EZX and Rockfield, the world-famous Welsh dairy farm-turned-into-studio that has played an immense role in rock as we know it.

The Into the Dark EZX was recorded by multiple award-winning producer/mixer Tom Dalgety (Ghost, Rammstein, Pixies, Royal Blood) and drummer Mat Hector (Iggy Pop, Gutterdämmerung). It comes with three full drum kits as well as a bespoke set of cymbals and extra instruments derived from the Fields of Rock SDX. With the drums, the broad collection of presets engineered by Tom Dalgety as well as the custom MIDI library by Mat Hector, expect to get immersed in a monochrome journey that encapsulates the entire dark rock greyscale - from the blaring, raw and rebellious tones of post-punk to the dark, gruesome and macabre hue of industrial-tinged new wave and goth.

Just like an image would appear one-dimensional without shadows, a proper rock song would fall flat without some true grit. Are you ready to head into the dark? Enter at your own risk.