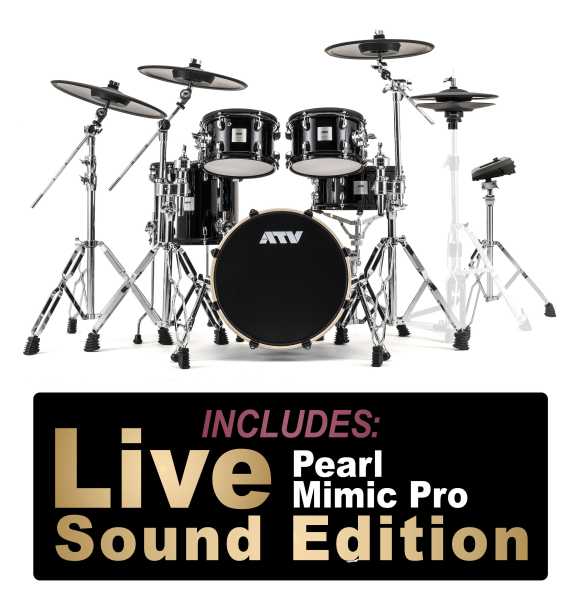 What is the philosophy of the ATV aDrums Electronic Drums?

"When played gently, the drum is smooth and round. When you hit it hard, the drum has a commanding impact. Be inspired every time you practice, play, and perform. This is how you connect with your instrument. You desire more - raw power and emotion stir within you. These are the kind of instruments ATV creates for you."

The aDrums are electronic drums based on the concepts of Authentic, Acoustic and Artware. The goal of ATV is to unify the setup, size and feel to give you as a drummer a great playing experience.

Pedal and hi-hat stand not included

ATV aDrums - Dynamics that are comparable to acoustic drums

Previous electronic drums had hotspots that caused abnormally loud sound to be produced when the center of the head was struck, meaning that the sound module had to narrow the width of the dynamics to make these hotspots less obtrusive. The aDrums uses multiple sensors for the drums and cymbals, thereby providing a consistent sensitivity for the striking surface, and making it possible for you to express the full range that you intend, from pianissimo to fortissimo. The player's personality is fully expressed by grooves that are born from freely controlling a wide range of dynamics as on acoustic drums.

We made it easier to play side stick. The side rim features a beautiful contrast between the natural wood and the lacquer paint, and uses the maple material that's ideal for our newly developed frequency-specific detection technology. The strike feel of wood and the side stick sound are perfectly matched to ensure great playability. Rim shot and side stick can be played separately without having to use a side stick button to switch between them as on previous systems, giving you much more freedom in your performance.

Within a drum performance, the hi-hat is being controlled with the greatest detail. Most previous electronic hi-hats used contact-type sensors, which had limited detection precision and tracking ability. The hi-hat of the aDrums uses a non-contact sensor that allows high-precision sensing with no delay even when the pedal is opened and closed rapidly. The hi-hat control algorithm has been optimized for this new sensor, delivering even greater expressive power and accuracy.

More freedom for the cymbals

A newly designed pivot allows natural sway in all directions. Cymbals that can be played around their entire circumference do not require troublesome components such as a rotation stopper; simply place it on the cymbal stand just like an acoustic cymbal. ATV has also paid careful attention to the way in which the entire cymbal bends when the edge is struck, as well as to the thickness of the edge; this lets us approach the playing feel of a bronze cymbal in spite of using a silicone rubber surface for its excellent properties of silence.

The kick drum supports the groove

As the foundation of your performance, the kick drum requires stability and high-speed triggering. With a unique buffer structure that both dampens and senses the beater's strike, we achieve a solid feel and high-speed triggering.
The 18" shell and large spars deliver a feel of stability and assurance that let you mark the beat with confidence. Even for hard strikes using double pedal, you'll enjoy stable sensing and playability.

„The Mimic Pro is a giant leap forward in drum module technology. It is a state-of-the-art touchscreen computer filled with the most detailed drum kits recorded in some of the best studios in the world. But you will not know its true power until you play it!"
- Steven Slate

Immerse yourself in a world of first-class drum kits that were sampled especially for the Pearl Mimic Pro in some of the best and most famous recording studios in the world. All kicks, snares, toms and cymbals have been recorded in 24-bit, delivering a uniquely realistic drum sound. The 7" color touchscreen leaves clunky controls behind, allowing you to quickly and intuitively navigate through the Pearl Mimic Pro's many features. The sixteen inputs and outputs make the Pearl Mimic Pro the right module for basically any e-kit.