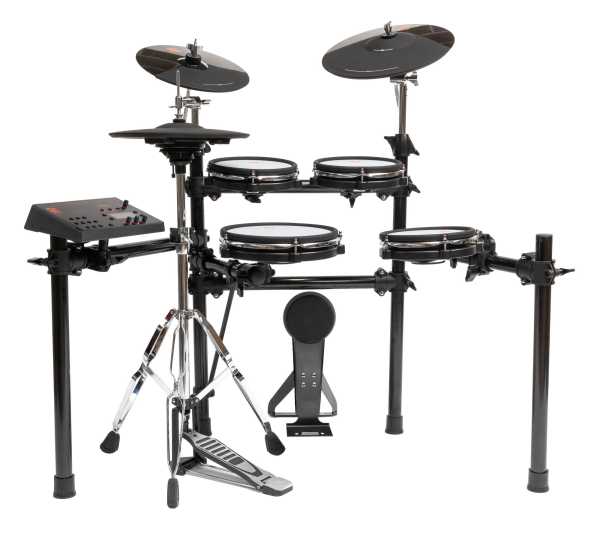 The Speedlight Kit is robust, sturdy and perfectly suited for beginners. The Mesh Head Pads guarantee a great playing feel with unique rebound.

The most important part of any electronic drum kit is the sound source. It is the heart of every e-kit. You can build an impressive looking set with lots of toms, cymbals, FX pads, etc., but - and this But is the key point - if your sound module doesn't have the latest technology with an unparalleled sound, the whole experience will be very disappointing. With the Speedlight kit you get one of the best e-drum modules ever developed in this price range. If you compare the data of the Di3 module with the competitors of other manufacturers on the market, you will see that the Di3 has nothing to hide.

2Box was founded in 2006 with the vision of providing drummers, whether electronic or acoustic, a completely new and groundbreaking sound experience. The first 2Box module DrumIt5 already had convinced fans. Now 2Box wants to create this experience once again for a completely new generation with the new Speedlight Kit!

Play any pad of your choice
The original DrumIt concept was a truly groundbreaking and new sensation for e-drums when it was introduced. 2Box now takes it a step further by introducing the DrumIt Five MKII module with Open Sound Architecture & Universal Trigger Interface. Based on the same technology as the DrumIt Five, 2Box has now added the Universal Trigger Interface, allowing users to connect any type of pad/trigger to the module. The new DrumIt Five MKII is compatible with all common pads and cymbals of the major e-drum manufacturers.

Open Sound Architecture
Step into the world of DrumIt sounds and enjoy the real playing feel, expressive dynamics and outstanding sound quality. Upgrade your old electric drum kit with modern sounds and be amazed when you're suddenly able to play buzz rolls and crescendo cymbals more realistically than you could ever imagine.
The free sound library contains tons of multi-layered sounds recorded and carefully edited in top studios. Because the sounds are built from many velocity layers, the gradual change between soft and hard hits is faithfully reproduced. And with the PC/Mac editor software, you can not only manage the module settings from the comfort of your computer, but also create your own sounds, loops, and even complex multi-layer sounds. Just remove the SD card from the module and insert it into your computer's card reader.

Save time and money
The DrumIt Five MKII is an inexpensive and affordable alternative for upgrading your current e-drum kit. You can simply use the e-drum kit hardware you already own. Simply plug in the module, adjust the trigger settings to your pads, and you're ready to go.

Play the kits of famous drummers
The DrumIt Five MKII comes with the standard sounds of Randy Black, Marco Minneman and Simon Phillips. If this is not enough for you, you can download many more sounds here.

Use other sound sources - the possibilities are endless
Using third-party software, you can convert sounds from famous drum sound libraries and play them back through the DrumIt Three sound module instead of triggering them via MIDI on your PC. Because the sounds are triggered directly in the module, the playing experience is extremely dynamic with minimal latency.

Be in control
The DrumIt Five MKII's universal trigger interface allows the user to control functions for a trigger, such as starting and stopping loops and/or metronome by tapping a pad, or switching the kit up and down by tapping 2 pads.

Very good and sturdy compact kit, even the rubber in the cymbals feels high quality and the hihat is excellent, people say that drumit5mk is difficult to use, I don't think so, and sounds are Really great, i have upgraded this kit with larger ATV pads and with few yamaha cymbals, everything works fine, ofcourse there is some tweaking with the module but nothing too difficult if you follow the manual. Good kit and does not take too much of space